Coming Clean – a white bear emerging from all the dirty matter from the back of the mind:

For the event “Egyptian nights”, organized by Cecilie Ullerup Schmidt at a place called Rio Bravo/ April 9th 2011, I once again came out of the head I was in. “Egyptian nights” was a night of confessions and of saying farewell to old mistakes, regrets and failures. Here, I was washed out of the head, together with 25 of the dirtiest little secrets from backthere. Throughout the night, however, a new more hygienic story emerged from all these dirty words.

The story that emerged:
“This mess of words here, consists of 25 dirty little secrets; confessions of regrets and mistakes both personal, big, artistic and petty – in 1635 words .

And speaking of dirty: There is an inherent discussion of hygiene in the notion of airing doubt and old mistakes. Some call it: ”coming clean”, some call it to ”spew one’s heart out, and the classically learned may call it catharsis. Catharsis is, in short, a way of purifying oneself of shit, by rolling in it. Usually an explanation starts with Aristotle:

In ”Poetics” he claims, that we can overcome our unpractical and rather uncivilised excess of emotion by living it out in the controlled environments of drama, literature or art. Some psychiatrists have also had some success with healing disorders by helping patients bring their pent-up, affects and emotion out into the open, in various ways. Catharsis is derived from the word ’kathairein’ which means to purge; a medical euphemism, for the emptying of the bowels. Thus, this timehonored bacteria-infested metaphor may be what justifies the messy but much celebrated disclosure of whatever dirt that is under the carpet. Since the cleanly housewives of the 50’ies were disclosed by the selfrighteously greasyhaired children of the 60’ies for hiding their drugs and alcohol in the back of their clean cupboards, cleanliness has been the symbol of everything hippocrite and untrue – and thus… any dirty little secret a symbol of everything true. 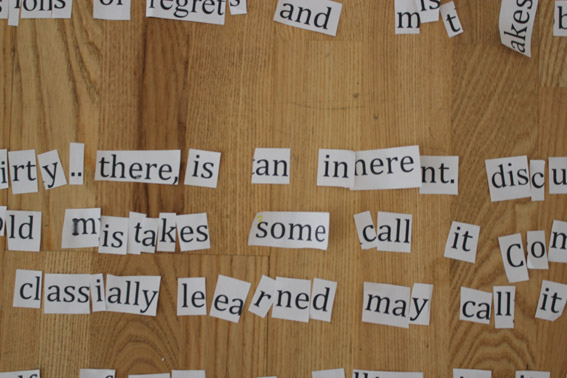 In 1987, however, selfproclaimed scientist David John Oates made a claim, that the truth was not actually this shit and dirt in itself, and he found a way to disclose all the actual truths behind the bullshit: In his “Reverse Speech, The Voice Of The Inner Mind” he claimed that one would always subconsciously produce sentences that, when played backwards, would reveal your true inner mind; your: ”dnim renni eurt”. Today, as I spilled my heart out here on the floor, it does actually seem that a tidyer truth is available behind my words.

When my coughed up innermost regrets are organized correctly, a critter emerges that may just turn out to be a white bear with concern for it’s fur. A white bear that was planted in our minds 1863 by Fyodor Dostoyevskij in his book ”Winter Notes On Summer Impressions” . Here he wrote that: ”if you set yourself the task, not to think of a white bear, the cursed thing will come to mind every minute” . Such a white being would of course not only find the idea of cathartis immensely indelicate, but also insulting, as this vain critter would then logically be one of those dirty ideas itself.

Instead this bear has come clean from the dirty withheld truths within me, with a roar that can hopefully complicate the unhygienic assertions that it is the dirt in the fur that makes a bear true. Perhaps it is a roar in favor of those utopian housewives who will not succumb to the gritty conditions of life nor reduce the grand idea of truth to a matter of mundane dirt, that was never good for fur.