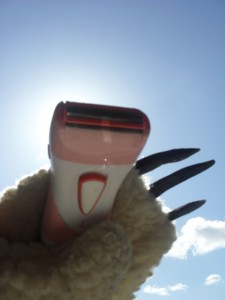 Comes April, comes milder weather, birds that are back from their southern havens and the ever recurring discussion that inaugurates the season of legs shaved silky smooth:

‘Tis a strange discussion; the discussion of whether or not the hair on the legs, in an irreversible process, starts growing longer and stronger once one has begun to shave it off. A discussion that is perhaps best suited for the mild mood one has on sunlit days, that makes one able to overcome the immediate impulse to despise it as folly – and despise such folly in a desperate world.

Nevertheless, this furry discussion seems to arouse some degree of passion; So much so that mothers give out fateful ill omens of irreversibility and eternity to their daughters as a warning against such seemingly desperate measures, and scientifically minded skepticists feel the need for a tint of life and death drama to their matter of factness, when they – through the fact that the strain of hair itself is dead, and that life is only in the follicles deep down under the skin – explain how unlikely it is that the hair will be able to react to being cut off.

Cosmetologists however, diplomatically accomodate both parties, and with political flair, and arguments of both feeling and fact, they politely agree on both theories. A cosmetologist would be able to tell us: that the stubble left on a shaved leg is all root, which makes it correct that the hair on the leg feels stronger than before one started on the folly of shaving it off; because roots are stronger than the tip of the hair.

At the same time every strong root can eventually grow out to become a fragile tip. Thus, the immediate feeling is not the whole truth, because over the course of time, the scientifically minded are also right in their assumptions that the hair – in the end – will once again be in just the same state as the bygone.

And what a wonderful scientific fact that is! A fact of chances not lost forever for an exhausted, stressed bear who gets lost over and over again in this world that it can only perceive through those same deceiving senses that tells it that shaved hair grows out stronger, although it knows that that is only half a truth about hair.

I wonder what kind of a beast I could be, if I would shave off the hollow transparent hair on my body that is not really white, but reflects the light of the world in such a wonderfully deceiving white way.

for more information on these subjects see: