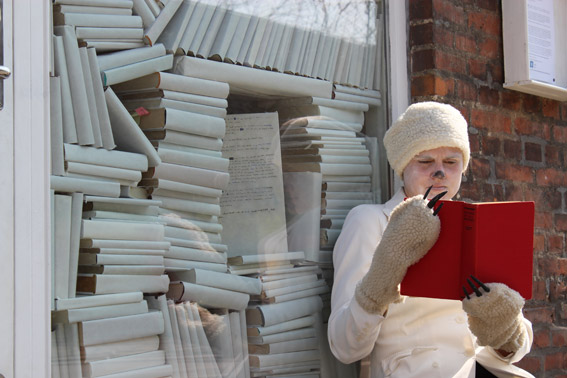 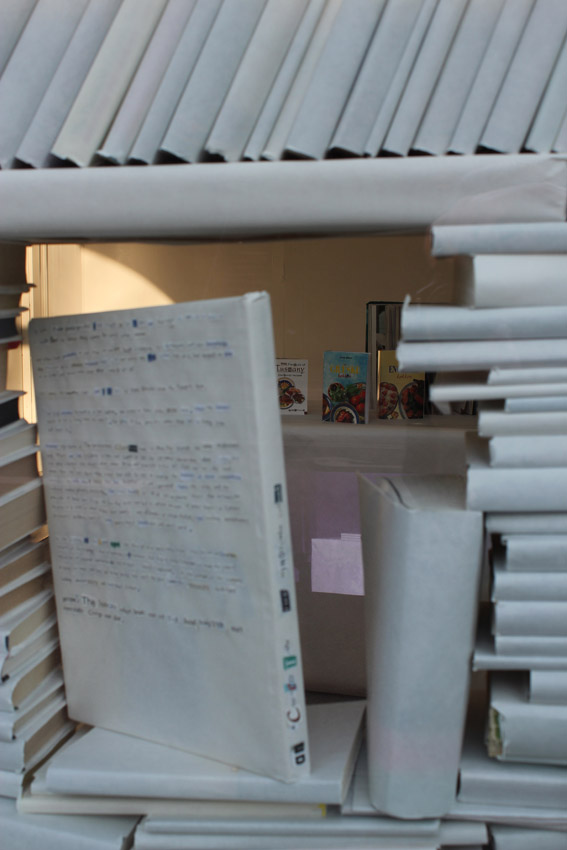 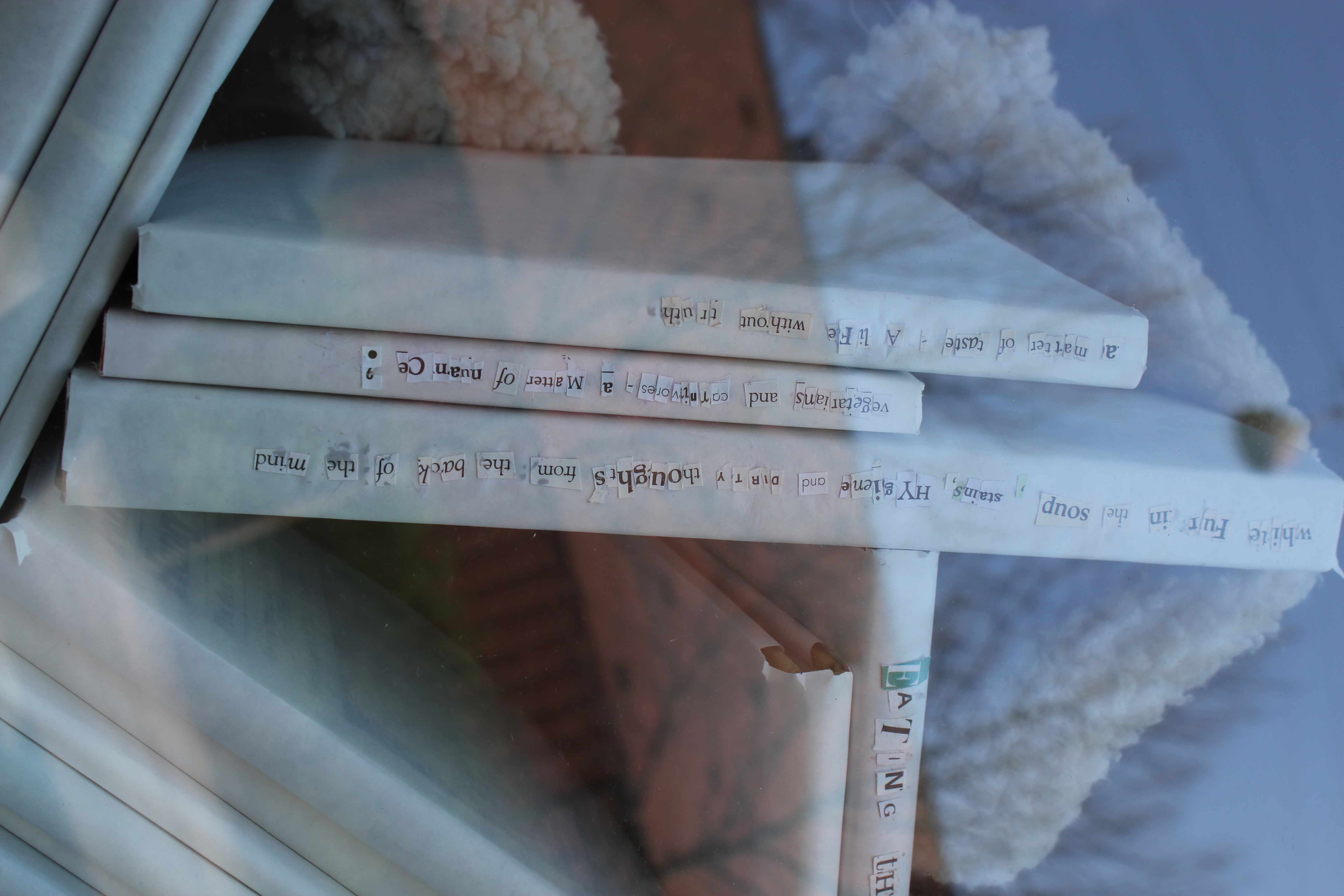 April 19th 2011 – Press-release:
This 4.th exhibition in the series of shows organized by Suada Demirovic called “Global lokalitet”/” Global Locality” is about the geography within us, white bears, and the whole wide world.

In 1863 Fyodor Dostoyevskij wrote that, if one sets oneself the task, not to think of a white bear, one will also quickly discover, that the cursed thing comes to mind every minute. He wrote this in his travel-diary “Winter Notes on Summer Impressions”, in an attempt to explain how we, besides being ourselves, are also born with an either russian or western (or danish, or vesterbro’ean) inner bear on our minds; An inner beast that has already taken some of the decisions for us, as to what kind of people we are going to be.

For this show, however, through and advanced stew, made out of a variety of national or regional cookbooks, the bear has come out of the head. Thus, out of the head, it will, during the show, sit in it’s library and, with the help of these cookbook’s “own words”, try and rewrite this history of internalized geography.

After many years in the head, with a pure spiritual diet however, the bear has become quite a peckish little critter, that wont eat just anything. By the end of the show, therefore, the bear will, present what is hopefully a new and stimulating culinary experience, and invite everyone for a advanced leftovers. Here, it will prepare a selection of those new recipes that are left in the cookbooks after the bears are freed from them.

The following text was written on the back of one of the books in the white bear library – in the words of all the cut up national dishes:

Text from book:
An Acquired Taste the mindblowing cookbook

In 1863 Dostoyevskij wrote that if you try and set yourself the task not to think of a white bear, the cursed thing comes to mind every minute.

Everyone have probably, at one time or another kept something to themselves, and this knowledge, that there can be a difference between what is on our mind and what comes out of it, has nested an idea of a true and inevitable inner roar, within us all..

In 2009 an unnamed inuit put it like this to Paul Watson from the Toronto Star:

“We will kill anyway because it’s our culture. We need to hunt polar bear meat. Once we haven’t eaten it for a long time, we miss it. Just like if you haven’t eaten steak for so long, you miss it.”

However –the thesis of this revolutionary cookbook is that you, through the same techniques with which we can acquire a taste and learn to like for instance blue vein chese, olives, and coffee, can also change our minds about white bears, and possibly even get them out of the head. When they are out, these white bears, they will be free to rewrite the history of those compulsive thoughts inside us. A history that has rendered all our unroared roars the truth and the cultured surface-growls deceitful.

This roar-theory is an all-encompassing theory, that defines principles of both law (like the law that inuits can kill a certain amount polar bears in canada, because it is part of what makes them inuit ) and all kinds of other fields; like cooking, geography, psychiatry, politics, love, parenthood, beauty, healthcare art and much more. In the long run, this book argues, the idea of this true inner roar, may be an undynamic version of the truth, that enlightened truthseekers had hoped could liberate us from the static belief in eternal, unchangable and divinely created conditon.

In the pursuit of the earnest, it seems, we may just end up being stuck with nothing but bombastic integrity, backward looking authenticity and regional dishes. Getting the hungry white beast out of the head however, may eternally change our diet.”

“You are all invited

To everyone on the outside!

I, the white bear, the beast inside all, have since the 21.st of April, been sitting behind this library, trying to extract new universal meaning from national and regional cookbooks. I guess that I, as such a book-enclosed bear, could somehow justly be called: the truth behind all the words.

The truth, however, must eventually come out, and on May 12th, 2011, this deep bear, cordially invites you all, to celebrate the surface and it’s surfacing. Let us all meet on the exterior, sip chilled wine and eat hors d’oeuvres, prepared according to the remnants of recipes from these passéist monuments of national truth.

The bear behind the facade.”