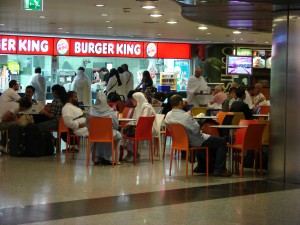 My claws were safely stowed in the suitcase, my cold heart trembled in nervous excitement, and a couple of hours later, I was in transit in Istanbul waiting for my Turkish Airlines connection headed for Beijing, China!

I passed the time in pleasant conversation with a distinguished Chinese businessman, who gave me some good tips for my China experience, and also found a translation for ‘contemporary art’ on his pocket translator.

Encouraged by this conversation across barriers of language and culture,  I showed him the book I had brought to prepare myself, which was a chinese lovestory, but as he said, “who needs books when you have the internet? “Well you know, just for the plane” I said, thus agreeing with him, that books are outdated, which was, I feel, going too far for the sake of being polite, for a book-born bear.

I think maybe my intention at the time was, to return the civility he had shown, when I accidentally an unpolitely had compared the Chinese leaders with the ancient emperors. That, he had only commented with an uneasy giggle.

(The airport in Istanbul was also packed with moslem pilgrims (I think) in white. That gave me yet another chance to ascertain, that there are so many nuances of the white color, that I have a birthgiven interest in, and even more ways to wear it.)