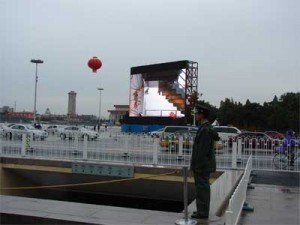 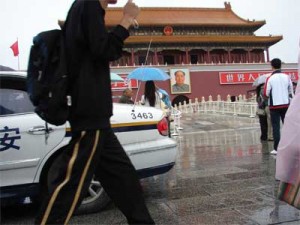 Tian’anmen Square, (天安門廣場)  the very center, of the kingdom in the middle was blocked from view and the access on the rainy sunday where I went there. Policemen, and restrictions indicated that something was going on that did not concern white bears.  I pulled in my claws  and strolled towards Jingshan park  (景山公园 – prospect hill) 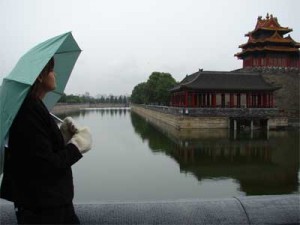 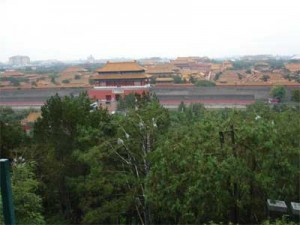 it is always hard to find ones way around things one is in the middle of. However, in the kingdom in the middle, on a  hill in Jingshan park,  the trees  are chopped off at the top to give the best view. This huge artificial hill that gave a 360 degree view of Beijing, was built in during the reign of the Ming dynasty, from all the rubble of the excavation for the forbidden city. That makes me think that the chinese have a tradition of believing in truth from above; in believing that things can only be seen as they really are, from the distance of height. As a true white bear of literature, I must quote Heinrich Heine’s lines about being on top, from aforementioned Atta Troll:

Atta Troll/Heinrich Heine/1843.
*see below for english translation
Furthermore, knowing how the era of these immortal words on the white bear, were mystified and inspired by the  strange faraway Empire of China, and how European parks from the era, like for instance the Parc De Buttes Chaumont in Paris  (Haussmann 1867) look much like Jinshan Park, I feel a strange kinship with China – as though I myself was born out of it.

*“Up there in the starry heavens/On the gold chair of the ruler,/Governing the world, majestic/Sits a giant polar bear.
“…”In his visage, harmony/And the silent acts of thinking/With the scepter beckons he/And the spheres are tinkling, singing”